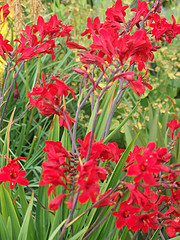 If you ask people what colours they like or dislike in the garden its not unusual for people to choose pastel colours and to say that they aren’t keen on reds, oranges or yellow. Yet as the season moves on towards autumn and the sun moves lower in the sky, these rich jewel colours are just the colours to chose to light up your garden. By late July ,early August the delicate displays of blues, pinks and mauves of the early summer garden are often looking washed out and faded and its time for the next part of the display, arguably the real fireworks, to come on the scene.

Now is the time to take a good look at your borders and think about plants to bring in some bold colour at this time of year. The reds and oranges of Crocosmia (what used to be called Montbretia) make a fantastic statement and there are quite a few cultivars to chose from, for a tall dramatic red go for Lucifer (pictured) or Hellfire or for smaller more subtle oranges try Emily McKenzie or Star of the East. [Have a look at the Avondale Nursery website at Baginton (www.avondalenursery.co.uk) – they have lots to choose from.] Then there are the Heleniums, or Sneezeweed, a daisy like flower that comes in many shades of yellow, orange and even brick red. Sahins Early Flowerer, or Moerheim Beauty (pictured) are both striking and generally reliable. 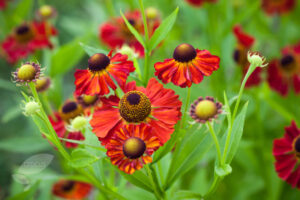 Old favourites from the cottage garden such as Golden Rod (Solidago) with its sprays of tiny yellow flowers make a great companion for these reds and oranges as do many of the Haemerocallis (Day Lilies) such as the yellow ‘Solieil D’or’ or the dark red ‘Stafford’, even the more common Day Lily the orange Haemerocallis fulva looks great in this palette even if it can be a bit invasive.

Another attractive but slightly thuggish plant is the perennial Sunflower, Helianthus perennis, growing to at least 2m high and flowering profusely from late July until the first frosts it’s a great back of the border plant mixed with hot colours. Helianthus ‘Lemon Queen’ is a deservedly popular cultivar, just don’t let it have too much space or it will fill it!

Late summer is also when coneflowers come into their own, native to the American prairies, these daisy shaped flowers with prominent cone shaped centres such as Echinacea and Rudbekia are reliable stalwarts of the late border. Echinaceas come in a range of colours from the white ‘Virgin’ and pale yellow ‘Cheesier’ through the pink ‘Magnus’ to a fabulous range of dark orange/red Echinacea cultivars such as Tiki Torch, Sundown, Tomato Soup and Hot Papaya. A word of warning here though, some of these newer cultivars are not as hardy as the basic pink Echinaceas. Although they can withstand drought and very low temperatures as they would do in their native environment, they do not do well in clay soil where they are both waterlogged and cold over winter and disappointingly often only last a year or two from planting.

Similarly as well as the popular cultivars of Rudbekia e.g. ‘Goldsturm’ and Little Goldstar’, newer red or orange flowering versions such as Rudbekia ‘Prairie Glow’ and ‘Cherry Brandy’ are also available.

For a bit more variety in shape, why not look at the good old fashioned Red Hot Poker (Kniphofia)? A bit of a marmite plant, but even if you hate the traditional red and yellow version there are so many others to choose from in much more subtle shades there will be one you like. A pale apricot medium sized cultivar ‘Drummore Apricot’ offers a gentle harmony to brighter plants, Kniphofia ‘Bees Lemon’ is a pale yellow while the statuesque ‘Tawny King’ will provide masses of very tall orange flower heads that fade to apricot and yellow as they age. There are even miniature Kniphofias for the front of the border with the Popsicle range only growing to about 35cm high in mouth watering fruit shades Papaya, Pineapple, Banana and Mango.

Another plant guaranteed to bring texture and variety to your late summer border are the Achilleas with their ferny leaves and flat heads of flowers, they come in a variety of colours from the orange of Achillea ‘Terracotta’ through the pinks and burgundy of ‘Summer Berries’ and Achillea ‘Cassis’ to hot reds such as ‘Paprika’ and ‘Pomegranate’.

Or for something quite different in shape and a real bee magnate go for a Monarda (also called Bergamot) there are wonderful tall strong red cultivars such as ‘Garden View Scarlet’ and ‘Squaw’. A word of warning though, Monarda are picky plants, described by the RHS as “capricious” they are the Goldilocks of the plant world and don’t like conditions that are too wet, or too dry, or too rich, or exposed etc. In other words great plants if you can find just the right spot. 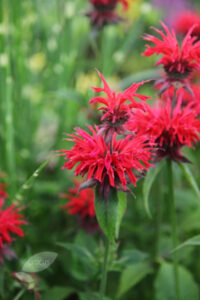 Having chosen all these wonderful vibrant colours just remember that sometimes they look even better against a contrast. So try adding some splashes of white perhaps using Leucanthemums (the Shaster Daisy) or set them against some darker leaved plants and shrubs such as Actaea (also called Cimicifuga) ‘Brunette’ or ‘Pink Spike’ with its dark leaves and skyrocket pink or white flowers. Shrubs like Sambucca nigra, Physocarpus or Cotinus add a stylish dark backdrop or mix in grasses such as Miscanthus. Miscanthus China, and Red Cloud are a great choice in the mix with their pinkish seed heads echoing the colour scheme. Or be even bolder and put in a few pops of colour from the other side of the colour wheel. Purple and dark blues look wonderful and this is the time of year for Michaelmas daisies (now confusing sometimes called Symphotrichum rather than the Asters we used to know them as).

This dark Michaelmas daisy is ‘Violetta’ but the slightly more lilac tones of ‘Little Carlow’ or Aster x frickartii ‘Monch’work equally well as a foil for hot colours, as does the airy presence of Verbena bonairiensis with its tiny mauve flowers..

The pastel beauty of early summer may have passed, but as you can see there is no need to despair, bring on the the late summer show!